Press Quotes | Images | Video | News
Polish twins Pablo and Pierre Caesar are the stuff of showbusiness legends. They started acrobatic training when they were five, by 17 they were Youth World Champions in Acrobatic Sports and by 18 were starring in a contemporary German circus. One night, blindfold and performing a somersault high above the ground, Pablo fell and was critically injured. Told he would never walk, let alone perform again, he defied doctors and the odds and, supported by his brother, made a complete recovery.

In collaboration with acclaimed Artistic Director Markus Pabst (La Clique, Vivace, Soap, Versus), the Twins became an instant hit when in 2004 they starred in the original sell-out production of international smash-hit cabaret show La Clique.

The Twins also create and direct other acts for artists awarded a scholarship to the elite acrobatic variety school they launched with Markus Pabst called BASE Berlin.

Pierre Caesar is becoming a well known and much sought after director in his own right and Pablo Caesar has spent some time training up and coming acrobats with Australia’s much-loved children’s Flying Fruit Fly Circus.

The twin’s smash-hit live performances at the Edinburgh and Brighton Festivals, across Europe, south-east asia, Australia and in London’s West End as well as on television’s Royal Variety Show (in front of The Queen and to more than 10 million viewers) have catapaulted these talented blonde acrobatic bombshells into the entertainment stratosphere.

Render unto Caesars—This is probably the most visually spectacular show you will see this year. Identical twins Pablo and Pierre Caesar appear to have sprung fully formed from the fantasies of Jean-Paul Gaultier—the sculpted naked torsos, crisp white trousers and bleached crops pay distinct homage. With its roots firmly in vaudeville, the Polish circus stars’ first London show—which follows a successful Edinburgh Fringe stint—cheerfully borrows influences from cabaret, silent movies, gymnastics, street theatre, video games and modern dance, and throws all these together to a soundtrack of techno, choral harmonies and smoky jazz. The routines are inventive and varied enough never to let the pace drop over 80 minutes, and there’s a poignant autobiographical note when they act out against film footage the story of Pablo’s 2002 near-fatal fall from the 16 metre Wheel of Death, and his battle to walk and then perform again. Do everything in your power to catch this limited run, and remember to strap up your jaw beforehand.
– Stephanie Merritt, The Observer

Dear Pablo, Dear Pierre,To this day, I still can’t tell you apart, but that doesn’t matter, because together you are unbeatable. Sublime body control, perfect appearance, incredible feats demonstrated with ease and all with a flirtatious look. What’s the catch? Stay as you are! For your World Tour, I wish you well.
– Boris Becker

High-octane gymnastic stunts… Pablo and Pierre Caesar carry out the sort of physical feats that are normally confined to the world of cartoons.
– The Independent

The Caesar Twins are the kind of guys you expect to find in a James Bond movie. Lithe, tanned, acrobatic little platinum-blonde bombshells, they grin in the face of extreme peril, adore confusing the spectator with how lookalike they are, and think nothing of sudden-death stunts such as backwards double air somersaults into a huge bowl of water. And watching their best work in live performance is more thrilling than any film could make them… Several of their stunts become so coherently lyrical that they’re ravishing: as when, while both are up in the air knotting and unknotting themselves on ropes, the one lower down winds himself upwards in a single over-and-over somersaulting phrase, coiling the ropes on his arms as he spins towards his brother. Sometimes they’re marvellous just in terms of circus excitement: there are flips,spins and catches here so fast and brilliant that you ask no more. But then they give you more, and spin in the air in winged, dreamlike pictures of flight and heroismo.
– The Financial Times, 2006

Pablo and Pierre Caesar are close to physical perfection… This show is a feast for the senses, and a celebration of human physical prowess.
– Michael Portillo, New Statesman

Dazzling show of physical theatre, acrobatics and variety from the identical twins who defy belief with their strength and ability.
– The Times

They might have only a fraction of the budget of Cirque Du Soleil but, with boundless gymnastic talent and cheeky charisma to spare, they’re every bit a match for the Canadian mega-circus… Whether simulating a Crouching Tiger-style video game, twirling off a bungee or using each other as human seesaws, they are the real deal when it comes to acrobatic tricks… Woven among the high-octane bouncy stuff is dance and comedy, strung round a frame designed to illustrate the telepathic bond that unites them, the X-Factor required to pull off their gravity-defying skills… In a gripping sequence which casts a chilling spotlight on a life-threatening accident Pablo once suffered, the result is circus with a defiantly human touch. Resistance is useless.
– Metro

A dazzling display of what the human body can achieve…the Caesar Twins also has elements of comedy…Their stunts are spectacular but a wink and a grin to the audience mid-stunt keeps the show from being too serious…Pablo and Pierre are completely in sync with each other during the action sequences and their reliance on each other—both as brothers and as acrobatic partners—is obvious, which makes the story of Pablo’s near-death experience and recover all the more touching… Superhuman.
– London Theatre Guide

The Caesar Twins are immensely skilful and versatile acrobats, equally at home performing aerial fetes (sic), tumbling frantically on an inflatable mat, or simply demonstrating their incredible strength by lifting each other into near-impossible positions. The range of their gymnastic capabilities is stunning if not breathtaking, and it’s already won them considerable acclaim and recognition… But it’s not just their acrobatic talents that have drawn audiences to their shows. There’s a real boy-next-door charm and warmth about them which, coupled with a slightly mischievous sense of humour, makes them instantly appealing… Diverse and mesmerising skills… To say the least, it’s an imaginative repertoire with a vital and youthful feel to it… Pablo and Pierre Caesar are at least on a par with anything I’ve seen in a Cirque du Soleil show… Hugely entertaining.
– London Theatre Guide

Words cannot begin to describe the almost sexual, electric-eel meshing of these identical twins… Grafted into the nine, increasingly esoteric scenes is an underlying theme of sublime, dual harmony, the idea that twins only become one when they come together… Each scene is an ascending step towards total, spiritual and physical fusion.
– QX International, 2006

The identical Caesar Twins from Poland, a gymnastic duo born minutes apart in 1980, are a dazzling crossover circus act…Indeed their lithe, muscular turn was a highlight at last year’s Royal Variety Show… Their acrobatic skills defy gravity, sculpturally intertwining to create seemingly impossible combinations of limbs and bodies until they achieve a watery climax.
– The Stage

Jaw-dislocatingly, mesmerically, super-humanly impressive physical performers… They have muscles in places where most people don’t even have places and they use them to defy several laws of physics
– The Scotsman

Awesome… jaw-droppingly impressive… it is impossible to resist their charms. A thrilling, immaculate performance makes this a definite crowd-pleaser… They look like a Pierre et Gilles postcard, move with the grace of ballet dancers and flip and contort with the strength of the finest athletes, all the while throwing each other flirty smiles.
– Metro 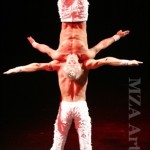 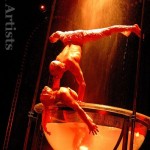 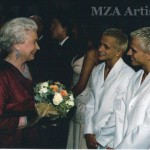 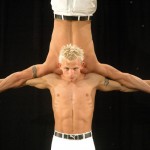 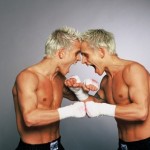 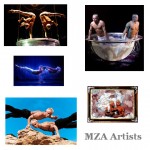