Press Quotes | Images | Video | News
David O’Mer is a shooting star in the world of German Vaudeville and world-wide contemporary variety and circus. An incredible fusion of a classic Greek statue and Nick Kamen from ‘that’ Levi’s ad, this Berliner performs his stunning aerial acrobatic act over and in a bathtub. His act is as physically spectacular as it is extremely humorous, resulting in the front rows of the audience getting very (pleasurably) wet indeed.

In 2003 David won the prestigious Newcomer of the Year Award from the Chamäleon Variètè, Berlin, with his winning performance being broadcast on German TV.

Since 2004 he has been starring in the sold-out smash-hit show La Clique as it tours the world in the Famous Spiegeltent, performing in London, Paris, Montreal, and throughout Australia.

Television appearances include The Royal Variety Performance (BBC 2004), When Will I Be Famous? (BBC 2007), Paul O’Grady Show (Channel 4 2007), Christmas Variety Special (ITV 2008) and Just For Laughs which has been screened all over the world.

An exceptional and graceful acrobat, he has the extraordinary ability to reach astounding heights with what seem to be slow-motion mid-air somersaults—it’s as if a screen action hero has come to life on stage, but with the special effects actually done for real, and live.

David also works as a compère and is currently developing his career as an actor.

The stunning vocals for the bath act are provided by award winning singer Yamil Borges, who featured in the role of Diane Morales in the movie version of A Chorus Line. The bath act was created for David by acclaimed German director Markus Pabst.

Never underestimate the visual power of a well-built man wearing nothing but jeans bounding in and out of a bathtub in gymnastic gyrations, using two straps suspended from the ceiling. That’s what my mother always said.
– The Age, Australia 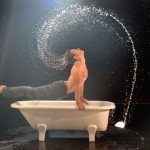 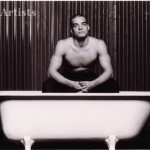