Press Quotes | Images | Video | Gigs | Links | News
Edinburgh-based comedian and writer Gareth Waugh first set foot on stage in 2010, making an immediate splash in the entertainment industry and described by the BBC as “One of the fastest rising stars of the Scottish comedy circuit”.

The two-time Scottish Comedian of the Year finalist and winner of Radio Forth’s Big Comedy Audition has appeared on numerous radio shows, including Radio 4’s The Speakeasy, The John Moloney Show, Radio 4 Xtra Stands Up and BBC Radio Scotland’s Breaking the News, both series of The Good, The Bad and The Unexpected and Live at the Stand. Waugh has also appeared on the BBC’s Scot Squad, hosted an episode of 2019’s Comedy Underground series, and, in 2020, featured on the Edinburgh Festival Fringe on Friday online broadcasts, as well as the highly successful Saturday Night at the Stand live-streamed series. Gareth was also featured on BBC’s Edinburgh Nights coverage of the COVID-affected festivals. .

In 2017, he sold out his much-anticipated solo Edinburgh Festival debut with Honestly, a show all about lying and honesty. Sharing the stage with two microphones, Gareth split his enthralling storytelling between them, with the premise that one mic must be for when he told the truth, the other only lies. Honestly defied its afternoon slot, receiving rave reviews and even selling out the extra shows added to meet audience demand.

On the strength of this debut, he was offered a four-week east-coast Australian tour in 2018, where he sold out his solo shows at Sydney’s Factory Theatre. He also performed Honestly in London’s Soho Theatre.

2018 saw his Edinburgh Fringe Honestly sequel Oh Boy…! also sell out its entire run. Described as being all about the Law Of The Playground, Gareth encountering travelling companions from Hell and accidentally fulfilling his teenage bucket list (excluding the failed rap career), this show featured in the 2019 Sydney Comedy Festival programme and saw him make his New York debut with an off-Broadway season, as well as coming to London’s Pleasance Theatre and to the Glasgow International Comedy Festival.

Gareth’s 2019 Edinburgh show Just Me…?, a comedian’s forensic look at his own foibles and bizarre past behaviour, premiered to packed audiences at the Underbelly and was set to tour Australia, in 2020, now postponed to 2021 as a result of the global pandemic.

In 2020, with all live performances being shut down, Gareth switched to online and in additional to his regular Twitch stream playing scary games and as a DnD master on Roll & Slice, Gareth was featured on the Edinburgh Festival Fringe online broadcasts, as well as the highly successful Saturday Night at the Stand live-streamed series.

Gareth is a regular in the UK’s major comedy clubs and festivals and, in addition to his stand-up and creating occasional short form clips for BBC Online, he is currently writing a new animated series for a BAFTA-winning production company.

Gareth Waugh revels in revisiting the glorious naivety of his wide-eyed youth with cheerful optimism….There’s not a lot of fat on his jokes and it all lands on pretty solid footing. The audience are granted a sense of comfort listening to somebody’s missteps and dreams because it feels realistic and oddly familiar… his distinct storytelling style, free from the usual cynical trappings of the format, and his invite for us to laugh at his painful resume of teenage accomplishments, cements Waugh as one of Edinburgh’s most likeable performers.
– Wee Review 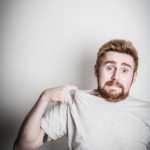 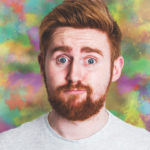 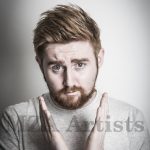 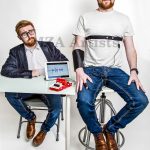 Gareth Waugh and Ryan Cullen—Clear And Oblivious: An NFL Podcast

Who Just Happen To Be English, Irish and Scottish 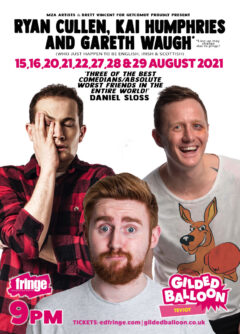 Tickets from the Fringe.

And from the venue.