Images | Video | News
Kai & Philipp met in 2003 at the Studentvariety Voila, at the Freien Waldorfschule Bad Nauheim, where they first began training in acrobatic variety. For three years they featured in a number of Voila performances and it became clear very quickly that this hugely talented young duo were something very special.

From September 2006 to June 2008, they attended the StaatlichenSchule for Artistic in Berlin and in 2009 they began working with director Markus Pabst, continuing this relationship as he created his BASE Berlin elite acro-variety team. They have since starred in theatre and variety seasons as well as gala events (including events such as London’s prestigious Daisy Ball) across Europe.

Stunning acrobatics, breath-taking aerial skills, strength, grace and harmony all blended together by dance elements are very much Kai & Philipp’s signature in their uniquely powerful and moving hand to hand and aerial performances. 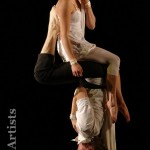